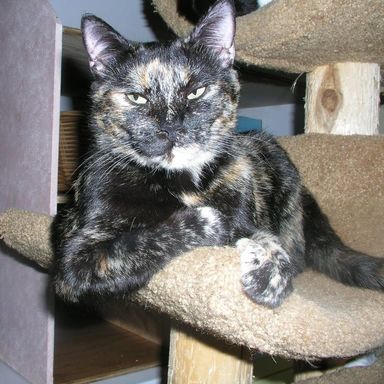 5 Jan 2013, Written by Elizabeth:
Today, we lost our dear mama kitty. Olivia was about the best pet you could ever ask for. Honestly, she was fabulous. We got her in February of 2006. We had seen her for months. She lived across the street and often sat on the old air conditioner by the side of the house. Well, she was quite friendly and started coming into our yard. She would play with leaves and she would follow us around while we did hung laundry on the lines. All she wanted was love. Well, we realised that she was expecting and we thought we would let her live in the garage. That didn't last long. The skunks started eating her dry food and we didn't want her to get in a serious fight with them.

So, one day, Mom decides that we will see if she will come into the house. Kind of work at introducing the idea of inside to her. So, we put wet food on a plate and closed off the front room, opened the front door and in she walks. She ate the food and then promptly climbed into the tunnel on the kitty tree house and prepared to stay. We were going to the movie theatre to see "The New World" that night and were not ready to deal with a new addition to the feline family. Man, did it take a lot of coaxing to get her back outside. We got the idea that she wasn't going to have such a big adjustment to indoor life as Mom thought.
So, the next day dawns and we prepare for the grand entrance. We didn't know the first thing about pregnant cats, so we figured we would segregate her so that the other cats (we had four at the time) would not pick on her. We drove to Lowe's and bought a wooden screen door, which Dad put up in place of one of the dining room doors and we made a whole little palace for her in the dining room. She had towels and a litter box and food bowls and beds and we even made a little cave for her by putting a large, dark tablecloth over the card table. She never looked back. If there was ever a cat who loved indoor life, it was Olivia.


Sarah and I spent a whole evening trying to name her. We had the air mattress up in the back room upstairs and were watching "Dodge City", with Errol Flynn and Olivia De Havilland. We came up with "Barbara" and "Olivia". So, she became "Olivia". We already had "Oliver" and we named one of her kittens "Olivier" (who we later called Manly).  Quite confusing . . . ;o)

Well, on April 15th, Olivia presented us with a litter of six surviving kittens. She had mated with two daddies, so, in reality, she had two litters at the same time. We got a grey-striped, a tortie, a tabby-tortie, a black, a tuxedo, and an orange-striped.They grew up in the dining room and Olivia discovered that she could have her life of freedom if she jumped through the screen of the upper half of the door. She was rather agile for even a cat. She would jump up and perch on the waist-height rim of the door and then jump into the living room and do whatever she wanted. She would go back to the babies the same way. She was an excellent mother.
In June, we decided that it was time for Mama to get fixed. She was in constant heat. She would sit in the little hallway upstairs and you would hear the howling start. First it would just be a little meow, then it would keep growing and growing until she sounded like a wolf who was howling at the moon! It went on all night! She was the cutest thing to watch, when she did it, because all that noise came out of her and she barely opened her little mouth! Well, the kittens seemed old enough and we figured we would stop the howling. We call and get an appointment and on that morning, we are lying in bed early in the morning and here a slight bang. Nothing too alarming. However, when we went downstairs about 15 or 20 minutes later, a screen was fallen in and Olivia was sitting on the front step (right next to little Romeo) asking to be let back in. Needless to say, we cancelled the appointment and at the end of September she had another littler of kittens. This time, we waited until they were about six weeks old and had her fixed before she could have another assignation with Romeo.

She was always a fabulous mother, and for her entire life she took care of the three "mama's babies" (Manly, Avis, & Frodo). She would bathe their little heads and let them sleep next to her and eat with her. She was really wonderful. The sweetest thing ever. Never a bad thought. She never looked back to outdoors life. If ever a cat needed no adjustment, it was her. She knew she had a padded life!


She was always sleeping on my bed at night. We would close the door and get ready for bed and then sit and pet her for a while. She loved it. You couldn't pet her head enough. And she had the cutest buff coloured chin. :o) Then we would lift her down to the floor and pet her for a bit while her little legs got used to standing (she was a solid baby who weighed 35 lbs) and then head to the door. She would toddle across the room and rub against your legs, wanting one last pet before leaving for the night.
She was terrified of thunder storms and big wind. She usually headed downstairs and would get underneath the washtubs, staying there until the noise was gone. She was so cute, if she didn't see it, it no longer existed. She would turn her back to something and it would be like it wasn't even there. The old story of the ostrich sticking its' head in the sand. She was quite a cutie!

So, with many memories to keep her in our minds, Olivia went to Heaven yesterday. I know that Manly must have been ecstatic yesterday morning and the two are probably together on a soft cushion right now. We'll never have another like her.