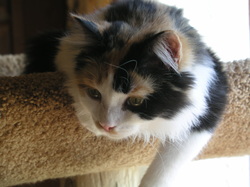 Monika is a long hair calico cat. She was dropped off at our local cat shelter when she was one week old, wrapped in a shop rag and left on the doorstep. She was fostered by one of the workers and they would carry her around  in a bag everywhere they went, as they had to bottle feed her so often. We got her when she was four months old, a month after Dee died. Monika is socially retarded and didn't even know how to play when we got her. Being a Maine Coon, she does not meow, she chirps. It sounds kind of like a bird in the house.

Personality - grumpy. She would really like to be an only cat and looks down on all the others as interlopers! When she is grumpy, her head gets flat and her eyes start squinting. Rather selfish, too. If one of the cats has a bed or place they like sleeping in, she takes it over when they leave. However, she has her own favorite spots that she usually goes back to. The top story on both kitty tree houses, any paper that is on the floor (Girlie loves paper!) . . . however, her very favorite spot is along the top of the sofa upstairs. We have two needlepoint pillows that lay flat on the back of the sofa, and she sits on those and will totally zonk out for the evening!

Monika has her own quirky habits . . . she likes to drink water by dipping her paw into the bowl and licking the water off of her paw. She enjoys pushing kibbles out of the bowl and chasing them across the kitchen floor. She loves watching birds out the window and sits and chips at them hours on end. If anyone sneezes (cats or people) she will chip a nice little "gesundheit", even if she is sleeping. (There is a track on Barbra Streisand's "Broadway" album that begins with her sneezing, and anytime it comes on, Monika will chirp at the cd player!) She is also a cheese nut. It has gotten so bad that anytime you are making a sandwich, she is sitting at your feet begging. She really likes feta, ricotta, sharp white cheddar . . . (Actually, Mom and Sarah are out there serving cheese for dinner and she is asking for some!).

She loves playing with the laser toy. She was the first of our cats who liked it and it has been a favorite toy ever since that first time. She isn't so great at sharing it with the other cats, but has gotten better over the years! >^..^< She isn't too hot on catnip. Doesn't really know what to do with it.

She doesn't like the sound of horses (the Amish buggies going by outside scar her to death and she doesn't even like horses in movies!) and loud action films are not her cup of tea, either. Actually, when she was young, Sis and I were watching a western and Monika was sitting across the room by the TV stand. A gunshot rang out and she bolted with a flying leap right onto my chest! She has gotten used to some action, but prefers musicals. She doesn't like opera, though.

She doesn't really know that her tail is her own. Or her back feet for that matter. She will be having wild-manzies on the floor or the tree house and will chase her own back foot and bite at it. Sometimes she actually catches it and gives a big yelp, thinking something was attacking her . . . and it was only her! Silly girlie! But her tail . . . it has never been a healthy plume, like Frodo and Sammy. It is very whispy and sheds big clumps. But, it is a great insight into her mood. It is always sticking up (with the tip bent to one side) and waggling. By the speed and type of waggle, you can usually predict her mood and current thoughts. I always think it looks like the antenna on bumper-cars. Or a palm tree in the breeze. ;o)