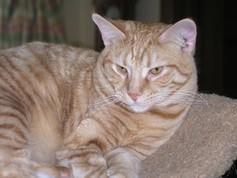 It is so hard to imagine that Manly is gone. I still expect to see him sleeping on my bed or on the trunk in front of the fire.  He was such a marvelous cat. Actually, Sarah and I were sitting on the sofa on Sunday, just watching Manly sleeping on the trunk in front of us. I told her that of all the cats, he would be one of the two I would really miss the most. Now he is gone. 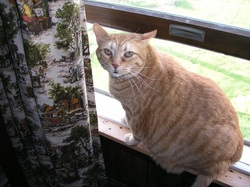 Manly was born in our dining room at 9p.m. on 15 April 2006. He was the last of the first litter of kittens. Sarah and I had been wanting an orange striped kitten, but one hadn't come yet. We had gotten a grey one, and a tortie one, and a black and white one, and a tabby one, and a black one. We were starting to give up hope, but then out popped the largest orange kitten you have ever seen! He was so big that he never had that baby rat-look. He looked like a baby kitten. Due to inbreeding and extended labor, Manly was a bit backward. He never learned to give himself a bath, didn't really know how to play, and he would get lost if he walk up to a wall. So he would start howling until someone turned him around and he saw that he wasn't stuck. However, Manly was all love. You could practically see little hearts coming from his head. If you passed by him, or looked at him, or petted him, he would start purring away. And he could purr! He had big, rumbly purrs. He never had a bad thought or a naughty thought. He loved attention. He would gaze up at you with half-closed eyes and a completely flat head, and it was just pure love. Everything about Manly was big. He weighted 30 lbs, and if he was sleeping on the sofa, he took an entire cushion! We had two dog beds that he liked. Some of the only ones he could actually fit in. Although, his favorite spots were on the beds or on the trunk in front of the woodstove. Sometimes, he would try and sleep in normal baskets and beds. Silly Manly. He would be bulging out all around and could barely lay his head down!

He always thought he was a little baby kitty. He loved to curl up next to you on the sofa or in bed. One time I was in Mom and Dad's bed reading, and he came right up and curled up in the tiniest (for him) little ball up against my stomach. It didn't look very comfy, but he was so happy. If you were lying on the sofa, he loved to curl up behind your legs on the blanket. He would always push himself as close to you as possible, which usually meant he was kind of propped up against you. He would purr for a few minutes and then when he finally went to sleep, he would do the biggest sigh and let out a moan. It was the sweetest sounding thing ever. 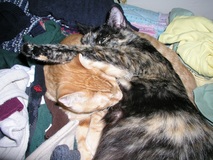 He was always a Mama's boy. Never realized that she no longer wanted to nurse such a strapping, big kitty. Actually, when she was pregnant with the second litter in September of 2006, she went into labor because Manly climbed up on the bed with her and started nursing! Silly Manly! Until the last, he always wanted his mother. Most times, if you saw Olivia somewhere in the house, you would find Manly not too far away. Both of them were soupy nuts. We would put some dry food kibbles in a bowl of hot water and let it sit a bit until the kibbles softened. Manly and Olivia loved it. They would sit at the bowl and just drink every drop of the water. Actually, Manly would go to get a drink and drop a kibble in the water bowl, then try and eat the kibble. It was funny to watch him chase the floating kibble. 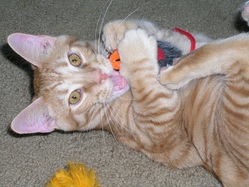 Manly had a few toys that he loved. His very favorite was an old rabbit-fur muff. We had had it as long as I can remember with our dress-up clothes. However, Manly found it somewhere when he was a few months old, and we never got it back. He would carry it in his mouth and walk around with it, howling all the while. Then one day, he sat at the foot of the stairs and tore every bit of stuffing out of it. Loved it even more then. ;o) We would come home or wake up and you would find his muff lying in front of the door or in the middle of the floor. Sometimes he would take it to bed with him.

He also loved chasing his own tail. He would work himself up to wild manzies, and then catch a glimpse of his tail (which was the funniest little thin tail, with a bend in the middle and a pencil-tip) and off he would go in wild circles after it. Sometimes, if he got to engrossed in the chase, he would bang into a chair or something. Poor Cubby. It was really funny to watch, though. He also loved catnip. In his own way, he went nuts over it. He would take a toy, and plop over in the middle of the living room floor and roll around with it. He had the cutest buff tummy and the tiniest feet and legs, so when he would be on his back, it was irresistible. 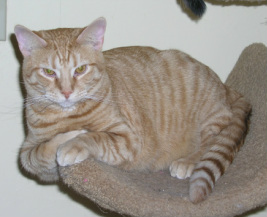 If we had the door to the back room upstairs closed, he would sit in the hall and paw at the door with both paws going full speed. It was really funny to see, if you happened to be on his side of the door. He got into the habit, earlier this year, of doing it all night on our bedroom door. That wasn't so endearing. However, he must have gotten the hint after several months, that we weren't going to let him in. He was really cute to sleep with, but once he got in position, he stayed that way all night. So, he slept great, but you didn't sleep much at all. ;o)

So, now we only have three kittens from that first litter left. They are all a bit lonely. Manly left a large emptiness, which will take a while to get over. On my part, he will always be missed. Time takes away the hurt, but my heart will always have a special place for Manly. You aren't blessed with a baby like him very often! We were blessed to have him for six and a half wonderful years. 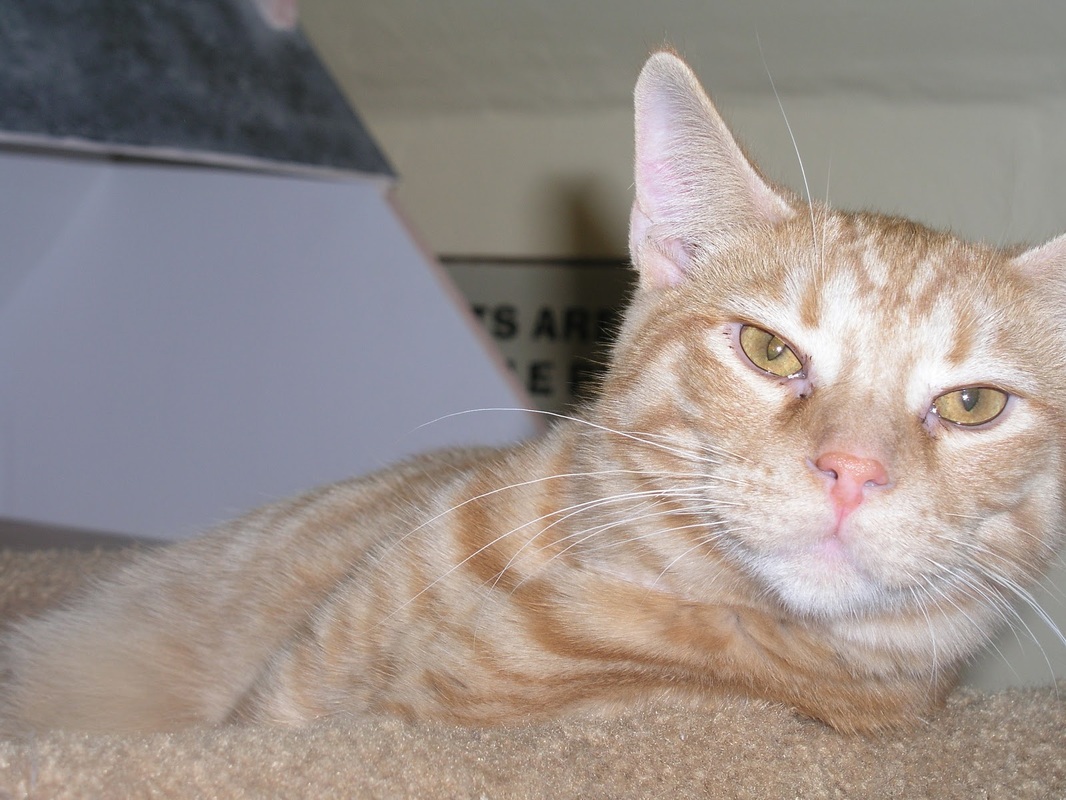