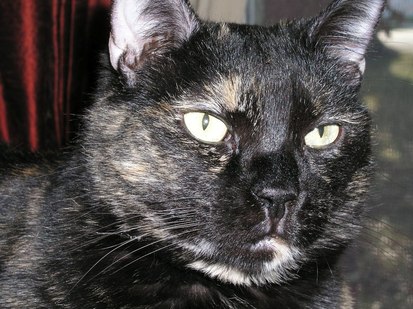 25 Feb 2012, Written by Elizabeth:
Today, we lost our little Mintie-Fish. We were blessed with our little darling's presence for five and a half wonderful years. She was born on Sept 29th, 2006, in the dining room closet. She was the first of the babies of Olivia's last litter to pop into this world. She was the cutest little thing from her first appearance. She was a very dark tortie who looked so much like her mother that it was disconcerting. She had her mother's round face, her mother's buff chin, her mother's round legs, and even her mother's three buff toes on her back foot. It took us about a week to pick the perfect names for the three surviving litter-mates. We debated on Arwen and Tinkerbell before settling on Aramintie. She fit the name perfectly and acquired several nicknames over the years. Maid Mintie, The Mintie-Fish, A Baramintie-Fish, Little Mama, and Mintiekins.

Aramintie was the cutest little kitty you've ever seen. Everything about her was round. She had perfect little peppermint toes and the roundest golden eyes that could look right through you. She was a little, live stuffed animal. Cuddly, soft, round, and wonderful. She didn't like being held, but she eventually got to like it enough that she would be pushing away from you as much as she could, all the while purring like a little motor boat. She never ate wet food, only kibbles. From a baby kitten she never cared. 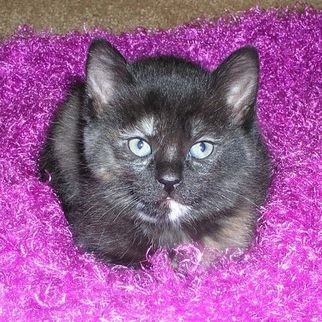 Her favorite toys were little fur balls, which she would have full-blown wild-manzies with, stuffing them in her mouth as much as she could and growling away at it until she vanquished her little toy. Catnip was a wonderful thing, which made her totally nutsy, causing her to roll around the floor, going from one toy to the next. She never meowed, not even as a baby. However, she had no trouble growling. Mostly at toys while she was playing. You could here the low sound in another room. She usually played alone, and didn't require too much companionship. The other kitties, particularly the mama's babies, thought that she was there mama when she was sleeping. You would go upstairs and find Avis or Manly or Frodo cuddled up against the sleeping Mintie-Fish, and you would know that they thought she was Olivia. :o) Aramintie also loved to play with the laser toy. She would be a dark shadow zooming around the rooms after the little red dot. She was really amazingly fast and rarely ever missed it.

Aramintie always loved another kitty to cuddle with her, although she never really sought companionship herself. Her human involvement consisted of a little frenzy every day around 2:30pm. Like clockwork, she would be at the computer chairs, stretching one paw onto your legs. Her claws were unmistakable! ;o) You would pet her, brush her, sometimes even hold her. She really was a little stuffed animal. She would sleep with her chin stuck straight out in front of her on the bed, or curled up into such a tight little upside down ball. Her favorite spots were on dirty towels in the bathroom (sometimes she would even pull a towel onto the floor so she could sleep on it), against Mom's pillow on her bed, the top story of the kitty tree house while we would be upstairs watching movies, or on the top of my piano. She was a very musical kitty, I could play my piano while she was sleeping on the top and she would care. Of course, she would stare at me through one opened eye over the top of the sheet music, but if I pretended not to notice her, she would go back to sleep. However, if I hit a wrong note, the eyes would pop open and I'd be in for more staring. Funny baby. But she didn't mind showtoons, classical, even opera, as long as it was on-key.
Well, she has always had mouth problems since she was probably six months old. However, she was never depressed, actually she was a very happy cat. But we knew that it would eventually get worse. She would occasionally have a bad day. You could never pet her face or her chin, even on good days. But she ate great and was always normal. For the past several moths, though, she has had more bad days and the last couple weeks she started really going downhill. She wasn't happy anymore and she started losing weight. We knew, and although for the past year we had all known this would come soon, it still hurts. This morning Dad had to take her to the vet. You know, it doesn't matter how many we have or have lost, each one is so special in their own way that it really hurts to lose them. At least she won't hurt anymore. Knowing that she is waiting for us with Dee, Sydney, Caddy, Aline, and Little Joe, I still can't help crying. I am rejoicing and thanking God for the five and a half wonderful years that he gave her to us. We'll never forget our little Mintie-Fish - one of the sweetest little kitties, who blessed the world with her presence. My Darling, I Love You!